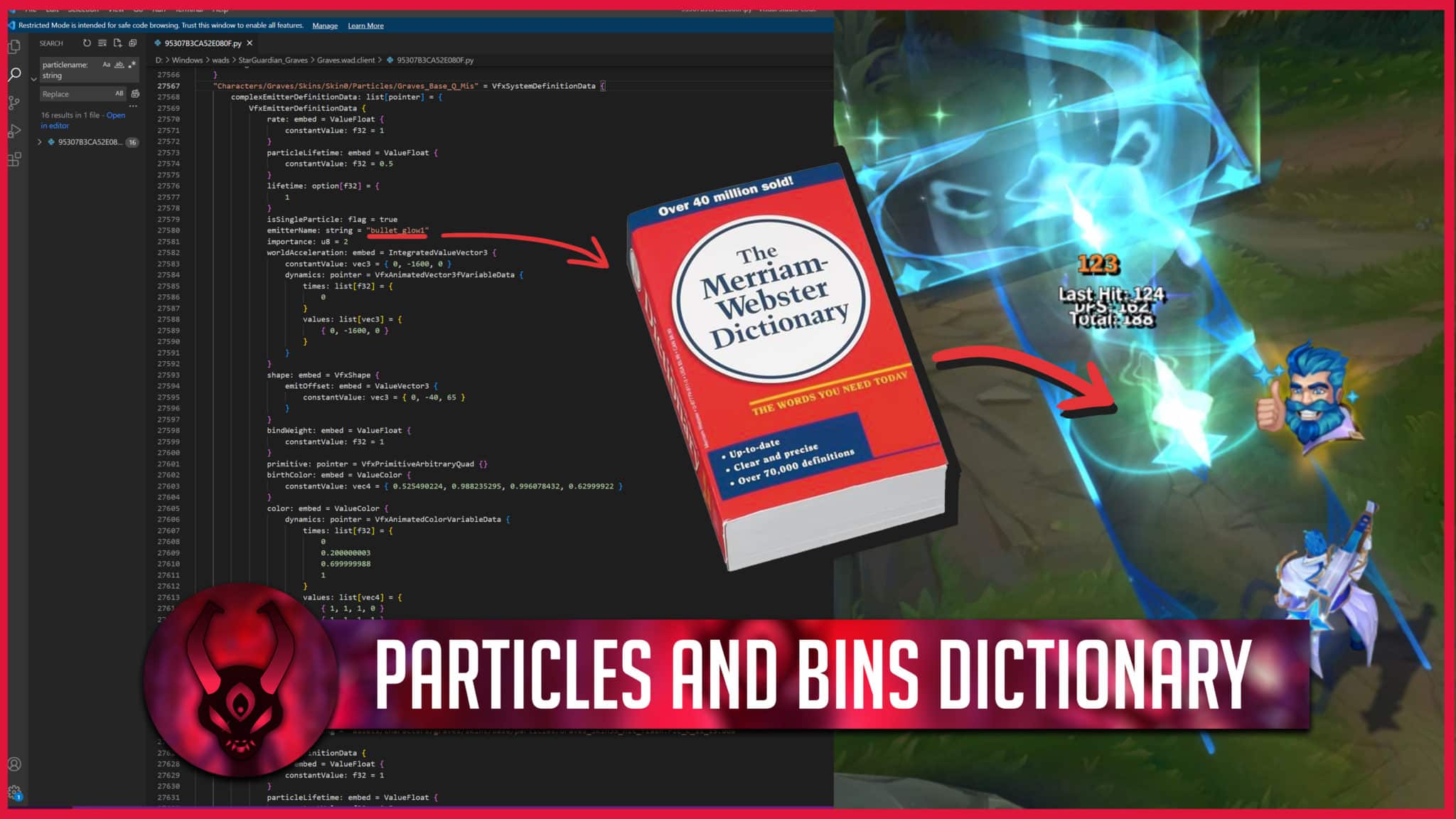 This tutorial is meant as an overall guide for dealing with VFX/Particle via bins.

If you encounter any issues with this tutorial or you don’t understand part of it, you can ask for help on the Killerskins-Discord server
or you can contact me directly: Bearded Shepherd#0849

Note: As we continue to learn more about particles as a community through experimenting, this post will constantly be updated.
This is a comprehensive dictionary for the most common terms that are used in particles. We will cover most of the basics so that hopefully you can gain an understanding of how you can manipulate the visuals of particles towards your desires.

This post overall is very complicated as we cover a LOT of things, so if you feel confused about something, always refer back to the terms at the top of the page. Don’t be afraid to go try it out and experiment since that is how most of us have learned. Should you need help, ask for it in the #help channel in the Killerskins Discord.

Container. Think of this as a neighborhood. A “Q_Mis” for example.

This is what defines all of the particles (vfxemitter) listed under the ability. Anything outside of this will not be seen while the ability is in action.

Particle or particle system within a container (vfxsystemdefinitiondata).

Think of this as the different houses within the neighborhood. This can be sparkles, a trail, indicators, mesh, etc.

Another way by which you can search for specific abilities should “vfxsystemdefinitiondata” names be hashed.

These can be renamed for organization purposes.

This is just like “vfxsystemdefinitiondata” just that it’s actually on the end of the system rather than the beginning.

A name given for a vfxemitter which can be renamed as desired. Good to rename for organization purposes.

Their names can be random sometimes but it’s always named to make sense to whoever originally made the particle.

Defines what texture will be used. Always in “.dds” format.

This is a texture which is multiplied over the texture it is listed under. If you know about the “multiply” blending mode in Photoshop, this is exactly what is happening.

This is ideal for being used over completely white textures in order to give a color. Useful for rainbow effects and scrolling textures!

If a texture is seamless, what this does is that it tells that texture to move horizontally, vertically, or both. (listed here are the different types of scrollrates that you can find).

The values listed next to scroll rate define how quickly a texture moves.

Followed by an SCB or SCO mesh. This defines what mesh will be used in an emitter.

Mesh with joint(s) and materials.

Mesh with a full skeleton and materials (standard export for League champions.

This determines the actual size of your champion in-game.

Controls how an object is viewed on screen.

Assigning a texture to a material applies the texture to all objects within that material.

Recall assets are nearly always hidden meshes. Anything that won’t be visible on the champion throughout the game will be listed as hidden. Through the animation bin under skin0 (or desired skin), you can actually tell these meshes to appear during certain animations. You can find more on that in the animation tips (will be added later).

Just like in photoshop, this determines how an emitter is projected over the environment.

I will repeat the same process for the other two values in order to get my desired color.
0 = Black, 1 = White.

The final value after RGB is the alpha.
1 is opaque and 0 is Full opacity.

You can use Marcius’s program, “Hacksaw” to make recoloring fast and easy!
Doing math won’t be required at all. This is just useful information to help you understand how these values work!

Shader which gives a highlighted appearance to an object.

fresnel color = A color value given to a fresnel. Similar to birthcolor, this is followed by RGBA values.

This is a texture image which typically displays a varying amount of gradients. The emitter using this pulls a specific gradient from the image as opposed to the other types of coloring.

Determines the amount of particles that emit from the emitter.

Adjusting the rate on KDA ALL OUT Prestige Evelynn’s sparkles.

Gives a list of RGBA values, rotation, position, AND/OR times. Given RGBA values which define changes in color. Times which relate back to RGBA by defining when each value change occurs within the emitter’s lifetime.

This is a map which defines how an ability, effect, or mesh appears.

Sometimes this can also use a green, red, and even blue texture. Each erosion pattern is defined by their own color channels. So X has it’s own erosion pattern as well as the green. The full on green or red appears first while the darker shades appear last.
– In combination with a pink and yellow texture map, this is what is used to define what the erosion map is constrained to. The yellow is the strongest visibility.

As it is specifically used in League, this defines distortions for anything behind the actual effect. Commonly used for explosions and puddles. Has a shockwave or airy appearance.

Always found directly underneath a “texture: string” to define how many frames the animated texture will cycle through.

There are different types of ways that particles within League are colored. They can be colored through a texture or within the actual bin files. The different types of colors that you can see fall under the following, “birthColor, color: embed = ValueColor, VfxPalleteDefinitionData and particleColortexture.

Will be added later.