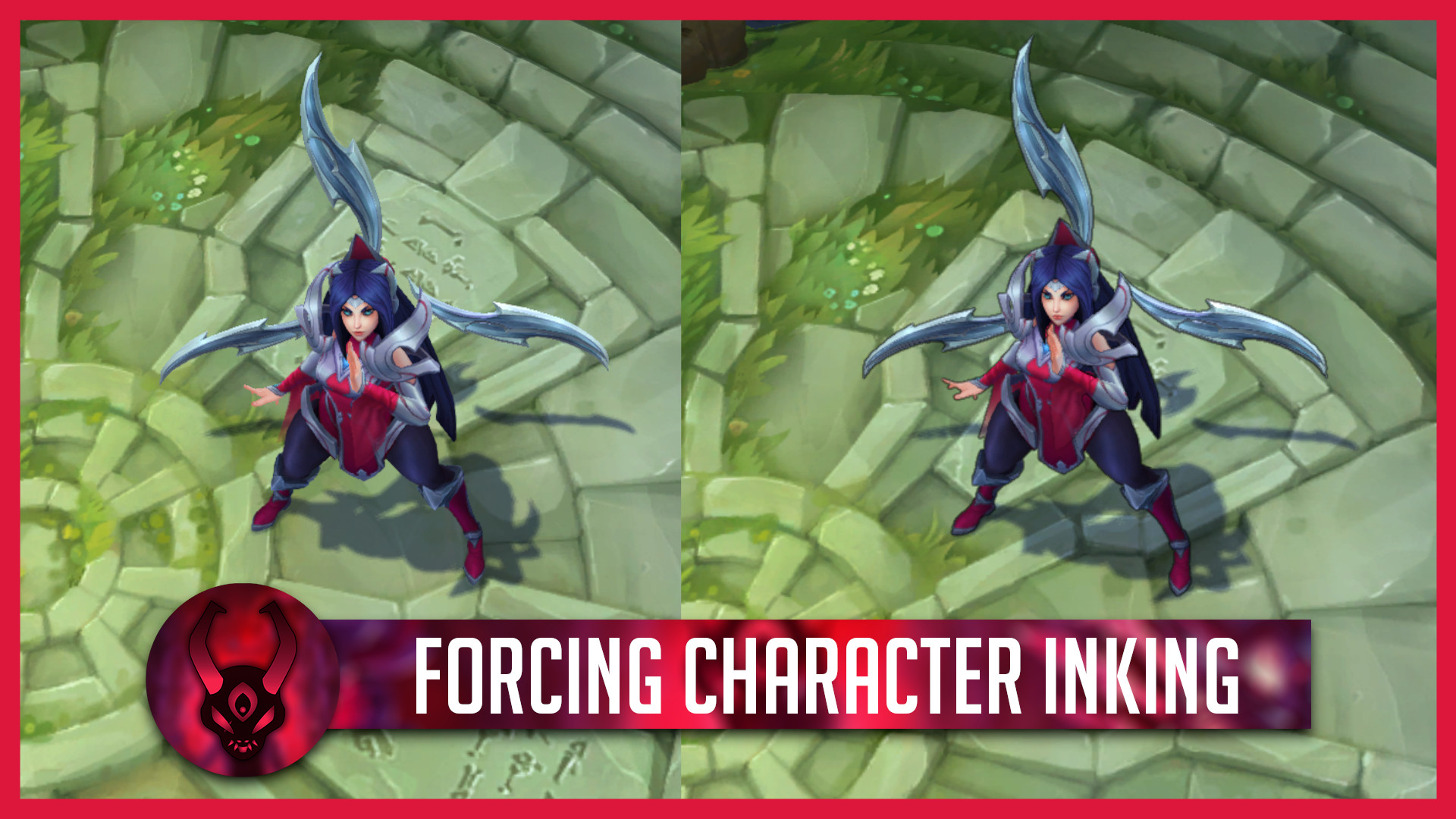 In this tutorial, I’ll be showing you how to add Character inking to whichever champion/skin you want!

If you encounter any issues with this tutorial or you don’t understand part of it, you can ask for help on the Killerskins-Discord server
or you can contact me directly: Crocosmia#2871

1) Open Obsidian, and locate the “.wad.client” file of your champion

2) Extract the “skinx.bin” file of said champion to your desktop

I recommend extracting file(s) into a folder, and naming that folder after the name of your champion, as you’ll have to eventually name it “Championname.wad.client” in order to install it. Feel free to give it that name immediately, even though I chose not to in the video tutorial.

3) Drag the “skinx.bin” file to “Ritobin_cli.exe” to convert the bin file to a python file

Self explanatory. Download Ritobin from the link in the “Required Tools” section of this tutorial, and simply drag-and-drop your bin file onto it.

4) Open the python file via Visual Studio Code (or any other editor you feel comfortable using), and locate “allowCharacterInking” under “skinMeshProperties”

This line of config will usually be located near the top of the bin for the champion of your choosing.

This will inform the game to correctly display inking on the champion when you enable the setting “Allow Character Inking” in League.

5) Save the python File, then convert it back to a bin file

Drag your python file back to Ritobin_cli.exe after saving your changes. This should automatically overwrite the pre-existing bin file, so all you need to do now is delete the python file that’s left behind after conversion.

At this point, make sure the folder is named “Championname.wad.client” In this case, I named mine “Irelia.wad.client” because I chose to ink Irelia.

7) Create a new mod in LCS, and drag your mod in

This is shown in the video, but if you aren’t able to figure it out, I suggest viewing other tutorials on the site for proper creation/installation of mods into LCS Manager.

Assuming you’ve enabled the character inking setting in League, simply start a practice tool match, and you’ll now notice that the champion/skin of your choice is inked!

ALLOWCHARACTERINKING doesnt appears when i do it with aatrox

i need a new tutorial, it doesnt appear anymore "ALLOWCHARACTERINKING"

Which champion were you working on? I just checked Zeri's skin0.bin, and it still had the line in it, so I'm surprised it doesn't show up on your end.

XWe use cookies on our website to give you the most relevant experience by remembering your preferences and repeat visits. By clicking “Accept All”, you consent to the use of ALL the cookies. However, you may visit "Cookie Settings" to provide a controlled consent. Read MoreCookie SettingsReject AllAccept
Manage consent

This website uses cookies to improve your experience while you navigate through the website. Out of these, the cookies that are categorized as necessary are stored on your browser as they are essential for the working of basic functionalities of the website. We also use third-party cookies that help us analyze and understand how you use this website. These cookies will be stored in your browser only with your consent. You also have the option to opt-out of these cookies. But opting out of some of these cookies may affect your browsing experience.
Necessary Always Enabled
Necessary cookies are absolutely essential for the website to function properly. These cookies ensure basic functionalities and security features of the website, anonymously.
Functional
Functional cookies help to perform certain functionalities like sharing the content of the website on social media platforms, collect feedbacks, and other third-party features.
Performance
Performance cookies are used to understand and analyze the key performance indexes of the website which helps in delivering a better user experience for the visitors.
Analytics
Analytical cookies are used to understand how visitors interact with the website. These cookies help provide information on metrics the number of visitors, bounce rate, traffic source, etc.
Advertisement
Advertisement cookies are used to provide visitors with relevant ads and marketing campaigns. These cookies track visitors across websites and collect information to provide customized ads.
Others
Other uncategorized cookies are those that are being analyzed and have not been classified into a category as yet.
Save & Accept
Powered by