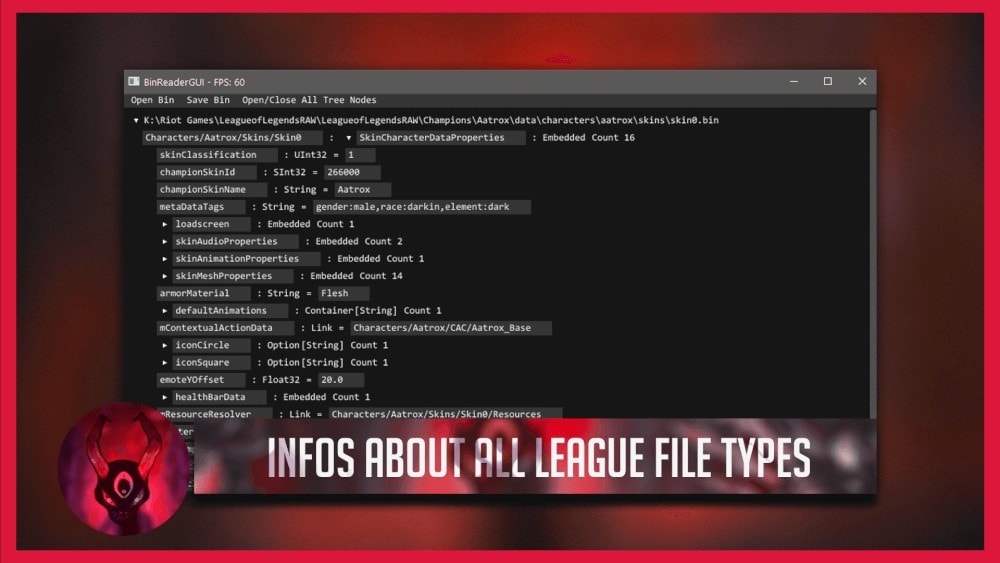 skn/skl: SKN (Skin File) is just the 3d model of the league character. This includes also materials and UVs. SKL (Skeleton File) is the skeleton of the character. .Anm Files work with them.

UV mapping is the 3D modeling process of projecting a 2D image to a 3D model’s surface for texture mapping.

DDS (Direct Draw Surface): This is the image format that Riot and most game developers use. These can be edited with Photoshop, Paint or Gimp with plugins.

ANM: These are the animation files for League Skin Files. Combined with the SKL it will animate the SKN character.

SCO/SCB: These files are models used for the particle system. They can also include skeletons which can be animated by .anm files in the .bin file format

BIN: Riot stores here all the code information for champions, maps, sounds, particles etc.. *..materials.bin includes: Materials, Particles, Sounds and more. All of them will be added to the map like Summoners Rift.

TROYBIN: The old Particle format is used for old particles. Only ~5% of the troybin files are used. Champion particles and map particles are now in .bin files. The format how the particles are coded not really changed.

Riot added these now to .bin or materials.bin files. They create and put all particle files into the specific champ or map .bin file.

BNK/WPK: Is the sound file format that Riot and some other developers use. In there are all sound files.

DAT: Is used for the old light and particle position in the map. Includes: location, rotation, scaling, color (For light only). Location, rotation and scaling (Particles only)

Riot added these now to the .materials.bin files for each map

NVR (SimpleEnvironment) is the first map format that Riot used. Old Summoners Rift and Twisted Treeline used for example this map format. Texture Files are included in the textures folder were also the current .nvr file is. Particles and lights are placed in the .dat format. All of the lights are dynamic.

WGEO (WorldGeometryMap) is the second map format. It was first used on the New Summoner Rift in S5. This format have the same texture structure. The lighting is fully baked into the textures which makes a better performance. But it takes more time to add light into the map. Particles are still loaded in the .dat files.

MAPGEO (MapGeometry) is the current map format. The map folder changed from levels to assets and data. Texture files are included in the assets structure and map files in the data structure. Mapgeo loads the particles in the ..materials.bin file next to the mapgeo file. The new format uses a Layer format to load more maps.

How to make the "TroyBin" files work again?