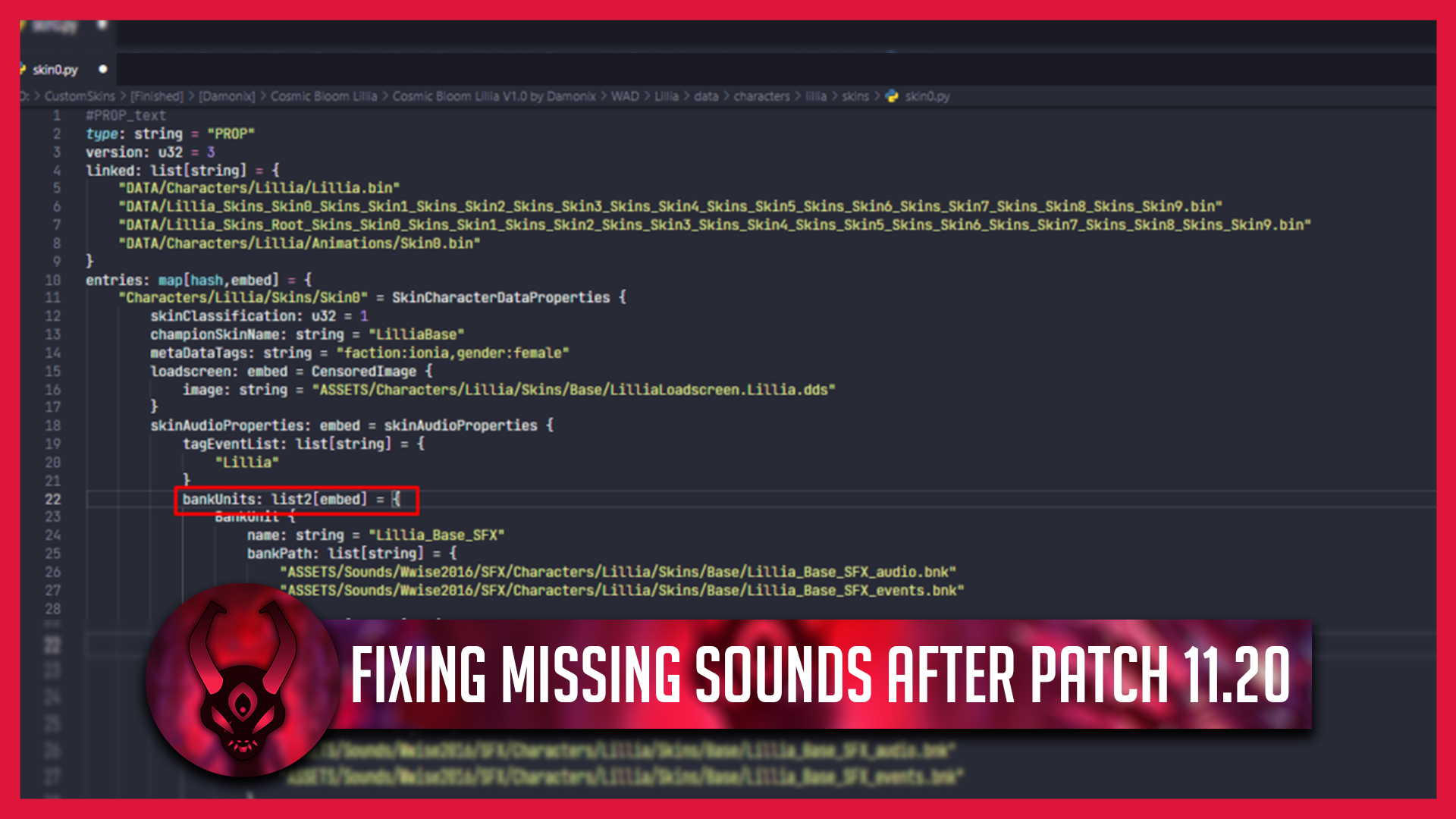 This tutorial will show you how you can fix missing sounds on skins after patch 11.20 broke a lot of them.

If you encounter any issues with this tutorial or you don’t understand part of it, you can ask for help on the Killerskins-Discord server
or you can contact me directly: Yoru#1006

IMPORTANT: If after extracting the .wad.client file your mod looks like this, it’s best to just wait for the creator to update it.

First make sure the mod that you want to update is imported and then close your LCS.

Go into your LCS directory, open the “installed” folder and go inside the folder of the mod that causes issues.

Now go inside the “WAD” folder. Drag and drop the .wad.client you can find onto “lcs-wadextract” inside your LCS-Manager folder.

After that you should simply have a folder called “Champion” (in this case Lillia) and inside something like assets and data and maybe some hashed .bin files.

Now you want to follow the path inside the “data” folder until you find a .bin called “skinX” (in this case skin0). Drag and drop the .bin file onto “ritobin_cli.exe“.
This will convert the .bin file to a readible .py file.

Delete the “skinX.bin” afterwards and open the “skinX.py” file in the program you want to use.

The program you’re using should have an option to “Find and Replace” inside the code.
For “Find” type in “bankUnits: list” and for “Replace” “bankUnits: list2“. (somehow this deletes the embed part, so I pasted a screenshot below)

Then the file is fixed and can load the sounds properly again.

Now simply “Save” and then close the file.

After that, drag and drop your “skinX.py” onto “ritobin_cli.exe” to convert it back to a .bin file.

Then delete the “skinX.py” so you’re only left with “SkinX.bin” again.

Go back inside the “WAD” folder, delete the “Champion.wad.client” and drag and drop the “champion” folder onto “lcs-wadmake.exe“.

Then simply start up LCS again and run the mod.

So i got the season 2 and 3 riven skin stuff and it has more then only one skinX so there are i think 9 skinX files. Any helpers ?

then you need to fix all

I did this for The Old Shen mod and worked. Thanks!

XWe use cookies on our website to give you the most relevant experience by remembering your preferences and repeat visits. By clicking “Accept All”, you consent to the use of ALL the cookies. However, you may visit "Cookie Settings" to provide a controlled consent. Read MoreCookie SettingsReject AllAccept
Manage consent

This website uses cookies to improve your experience while you navigate through the website. Out of these, the cookies that are categorized as necessary are stored on your browser as they are essential for the working of basic functionalities of the website. We also use third-party cookies that help us analyze and understand how you use this website. These cookies will be stored in your browser only with your consent. You also have the option to opt-out of these cookies. But opting out of some of these cookies may affect your browsing experience.
Necessary Always Enabled
Necessary cookies are absolutely essential for the website to function properly. These cookies ensure basic functionalities and security features of the website, anonymously.
Functional
Functional cookies help to perform certain functionalities like sharing the content of the website on social media platforms, collect feedbacks, and other third-party features.
Performance
Performance cookies are used to understand and analyze the key performance indexes of the website which helps in delivering a better user experience for the visitors.
Analytics
Analytical cookies are used to understand how visitors interact with the website. These cookies help provide information on metrics the number of visitors, bounce rate, traffic source, etc.
Advertisement
Advertisement cookies are used to provide visitors with relevant ads and marketing campaigns. These cookies track visitors across websites and collect information to provide customized ads.
Others
Other uncategorized cookies are those that are being analyzed and have not been classified into a category as yet.
Save & Accept
Powered by